If You Cannot Beat Them, Join Them - Congress Trading & Retail Traders

2021 was a great year for the market as SPY rallied about 25%, which is significantly more than its average yearly return. Many traders made money, but there was one group that made more than most of us, and that was the group of US politicians. In 2012, the STOCK ACT was introduced to prevent the members of congress from using any insider information to make trades, and require them to report their trades within 45 days.

The STOCK ACT prohibits members of Congress and employees of Congress from using private information derived from their official positions for personal benefit, and requires every Member of Congress to publicly file and disclose any financial transaction of stocks, bond, commodities futures, and other securities within 45 days on their websites. (Wikipedia)

We are not sure how much is the rule followed these days by the members of congress, but what we have seen over the last few years is how well members of congress have been doing extremely well in terms of their performance in the markets. This could either be just a coincidence, or they have more information than an average Joe. Whatever the case is, the purpose of this post is to help retail traders follow the congress trades to also earn profits like them. We at Tradytics are far more interested in creating an edge for Traders than creating headlines or hype. Let us dive right into the strategy. 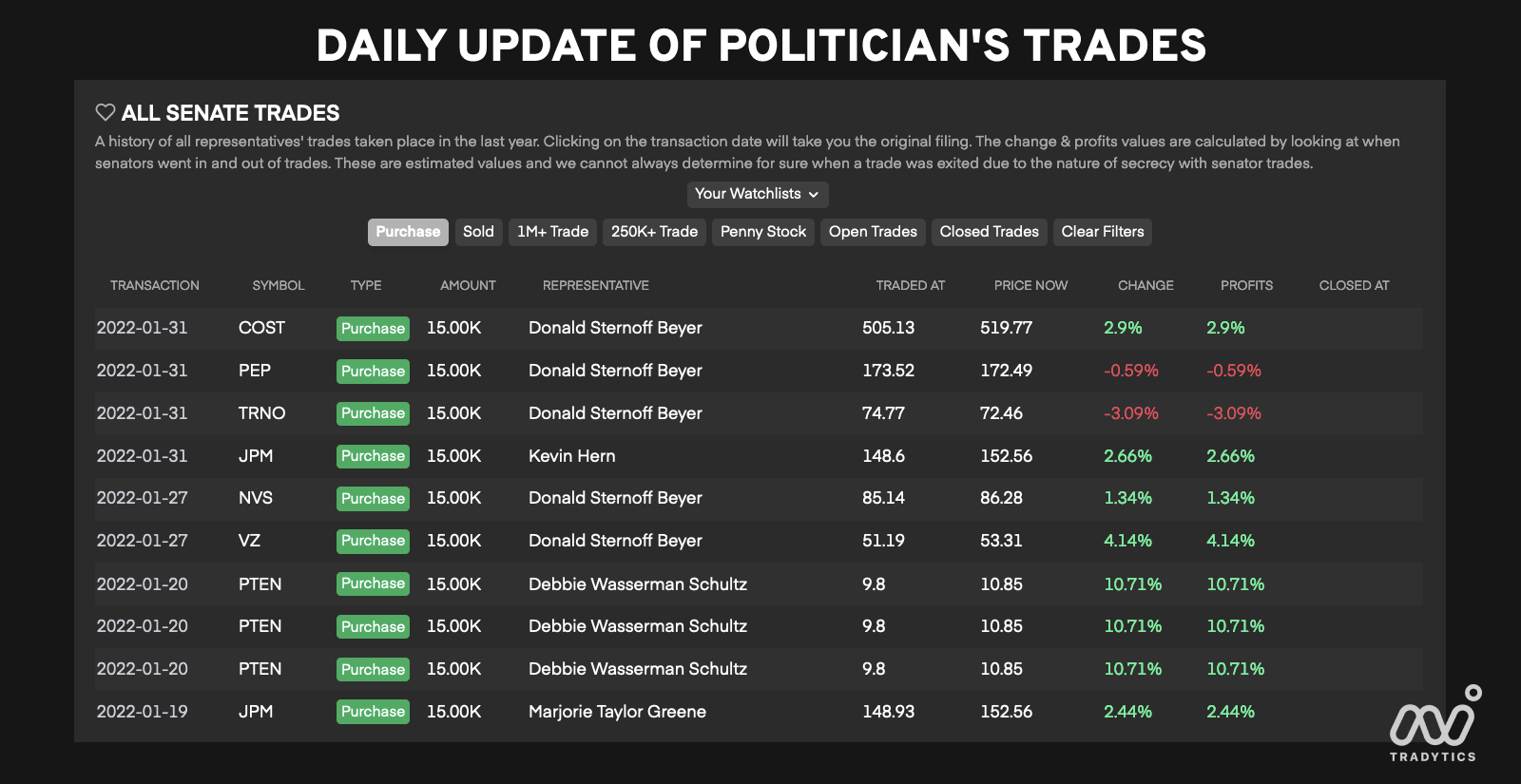 This is every single trade that gets reported - one way we can think about leveraging them is by simply taking the same trade. However, there are a couple of issues there. First, not all members of the congress outperform the market indices every year, only a few do. Second, these trades are delayed by upto 45 days. Sometimes, the stock might have already made a big move when they are reported, we want to be careful of that. Finally, different amounts of money are spent on these trades, and we want to weight them accordingly. The screenshot below shows the top trades made by congressmen and women - millions of dollars going into a trade should signify that these people are very confident in their trades, and we should be okay in following them. Keeping these limitations in mind, we try to solve them and end up with a solution. 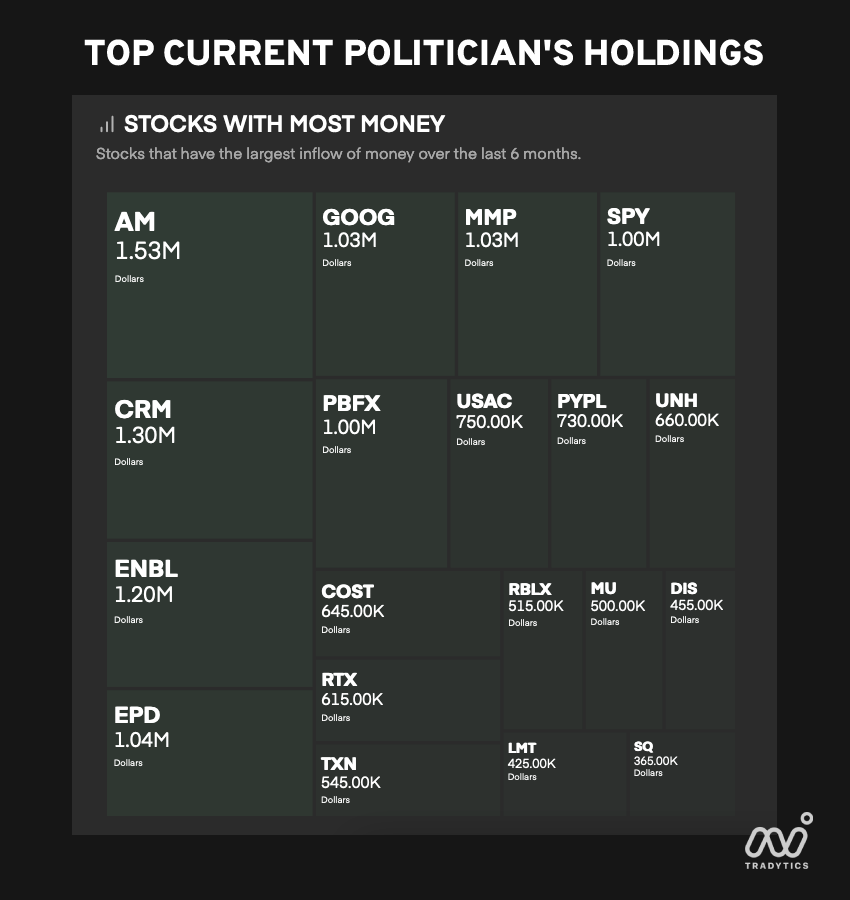 Looking at the historical data, we came up with a few observations. First, many congress trades have a long time period i.e congressmen and women do not enter into trades and exit immediately. This fixes the issue of the 45 day delay although it does impact us somewhat in case the stock has already made a big move before the report. Second, there are many smaller trades and it is hard to use them well. When significant money is being put into a trade, we want to weigh it more, as it provides us more confidence. Finally, we want to be able to update our picks as new data comes in. Based on these three observations, we developed what we call a Congress ETF that combines congress trades in an intelligent manner and outperforms SPY.

At every day, the congress ETF takes the top 100 trades based on their value and assigns them weights proportional to the amount that went into the trade. The weights of the symbols are considered their allocation, and it changes every day as new trades come in. Sold positions are automatically removed from the ETF once they are reported. Based on this dynamic allocation of symbols, we construct an ETF called Congress ETF. Before diving into more details, let us first take a look at the performance of the ETF and compare it to SPY. 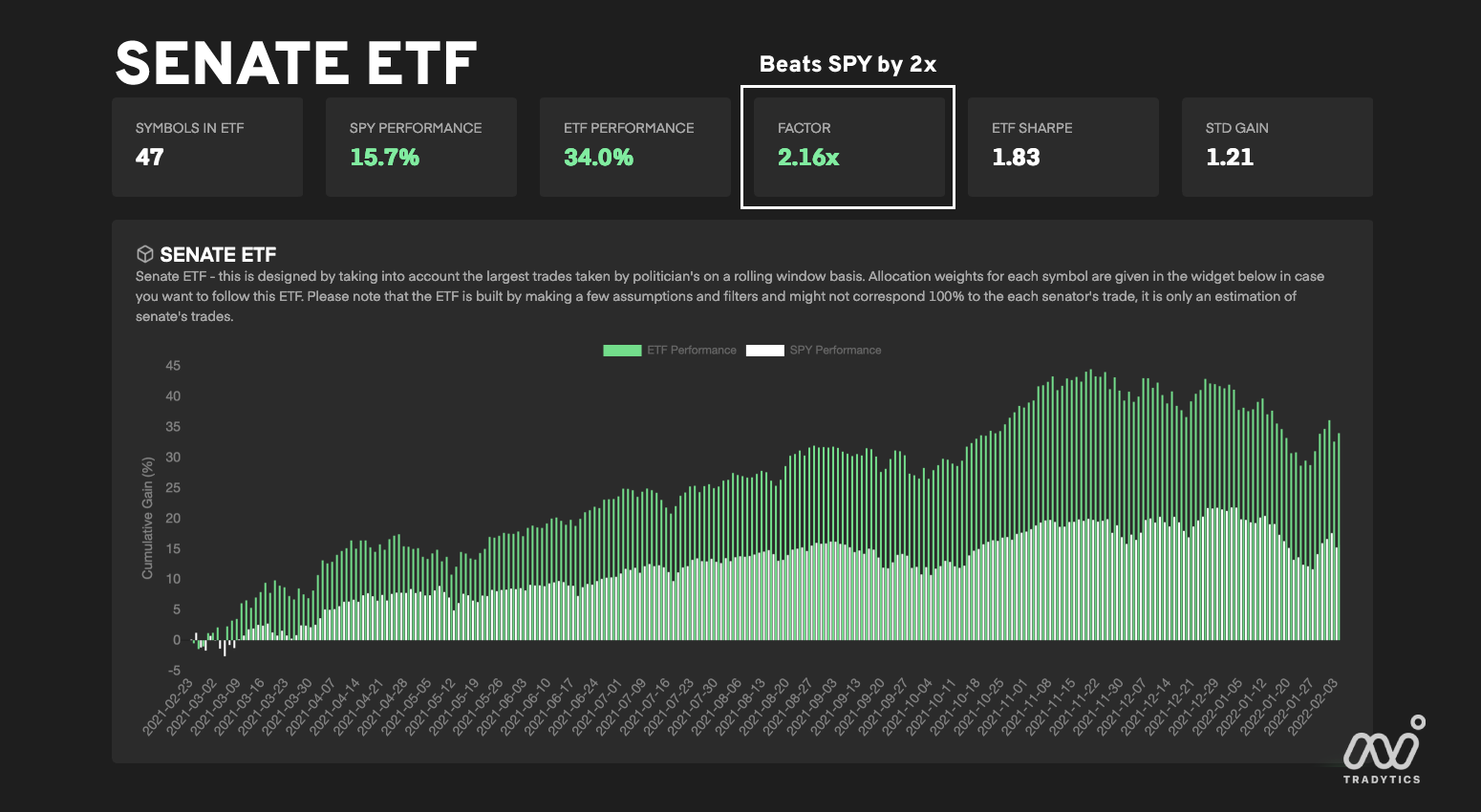 Looking at the chart above, we can see that the Congress ETF outperforms SPY by a factor of 2, which means it's twice as good as SPY. If you've traded for a while, you would know that beating the markets i.e SPY is not an easy job, especially on a consistent basis. Now that we've seen the performance, the question you as readers would have is how can you actually use the ETF to earn money.

In our Congress ETF, we keep a chart that shows the allocation of each symbol in the portfolio. All trades are long trades, and the chart on average updates every 1-2 weeks, since not many large trades are frequently made by the congressmen and women. For instance, an example allocation could be MSFT (40%) and AAPL (60%) which would mean if you have a 1000 dollars, you should buy shares worth 400 dollars for Microsoft and worth 600 for Apple. The chart below shows the allocation of symbols over time. There are about 47 symbols in the ETF right now, but if that is a large number for you, you can also pick up the top 10 symbols based on their bar size in the chart 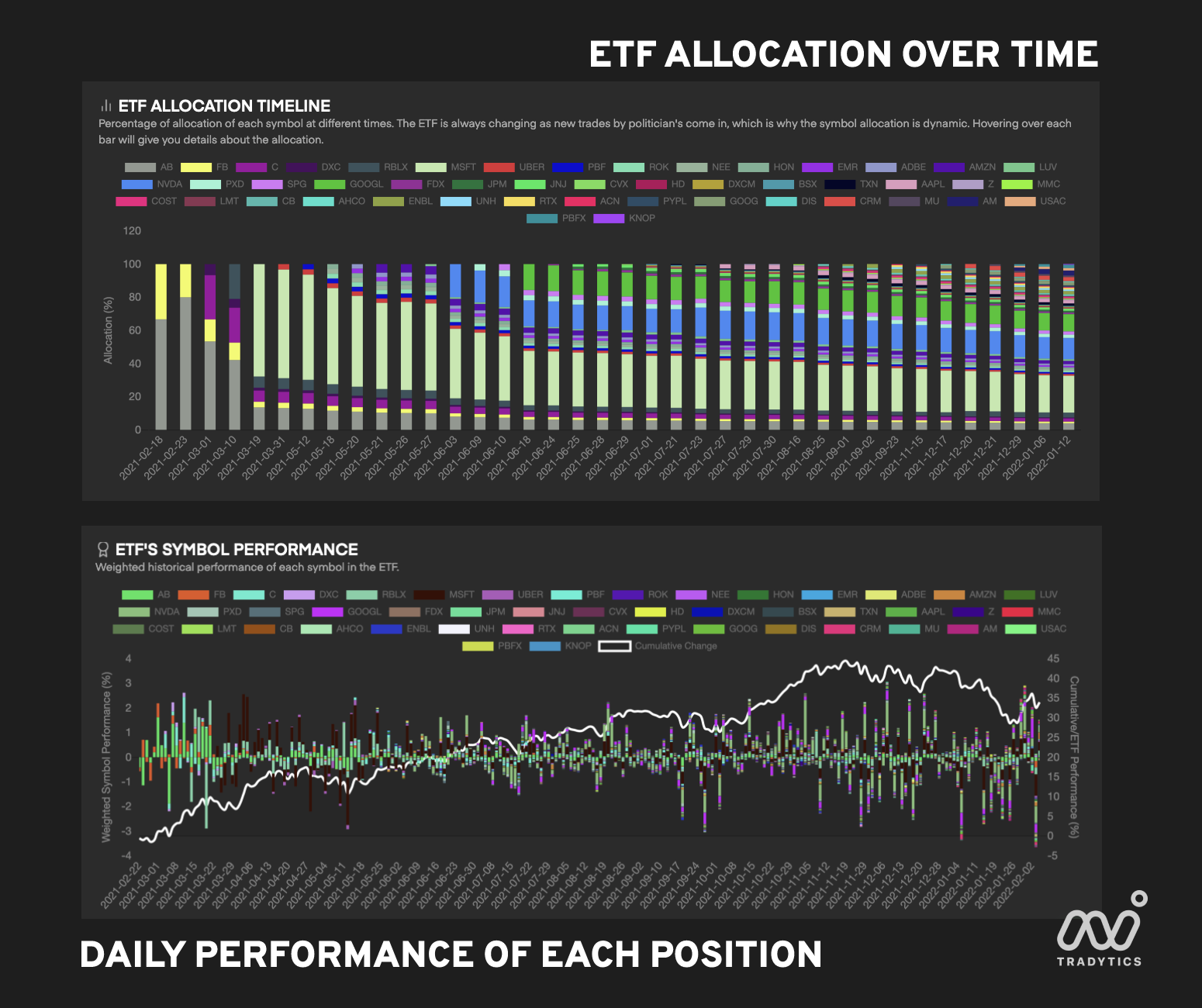 If you look at the allocation chart, you can see how each new bar comes after a week or two. That's because very large trades are rarely made by politicians's, but whenever they are, we pick them right away, and readjust the ETF. In future, we might automate and allow you to simply do one click and put a fixed amount of money in the entire ETF. But right now, the process is somewhat tedious and manual.

As we discussed, the Congress ETF at the time of writing this contains about 47 symbols, which can sometimes be too much to follow for a retail user. In order to fix that, we also allow users to analyze individual congressmen and women's portfolios. We employ a similar process as described earlier on the construct the ETF, but on average, there are at most 5-10 names in every politician's portfolio, making it easy for retail traders to follow. But which members of the congress should we follow? That's a good question and needs answering first. The chart above shows the average performance of each traded taken by the best performing congressmen and women. If you've read the news lately, it is no surprise to see the great Nancy Pelosi in there, because she did quite well last year. These are the people that we want to follow. Now let us take a look at Nancy's portfolio and see how easy it is at Tradytics to follow her trades.

In order to get the dashboard for individual members of congress, you can head over to our Individual Congress Dashboard. The default search is already for Nancy Pelosi, so we will dive right into her portfolio. The figure below shows her ETF performance, symbol allocation, and the times when readjustments were made to the portfolio. 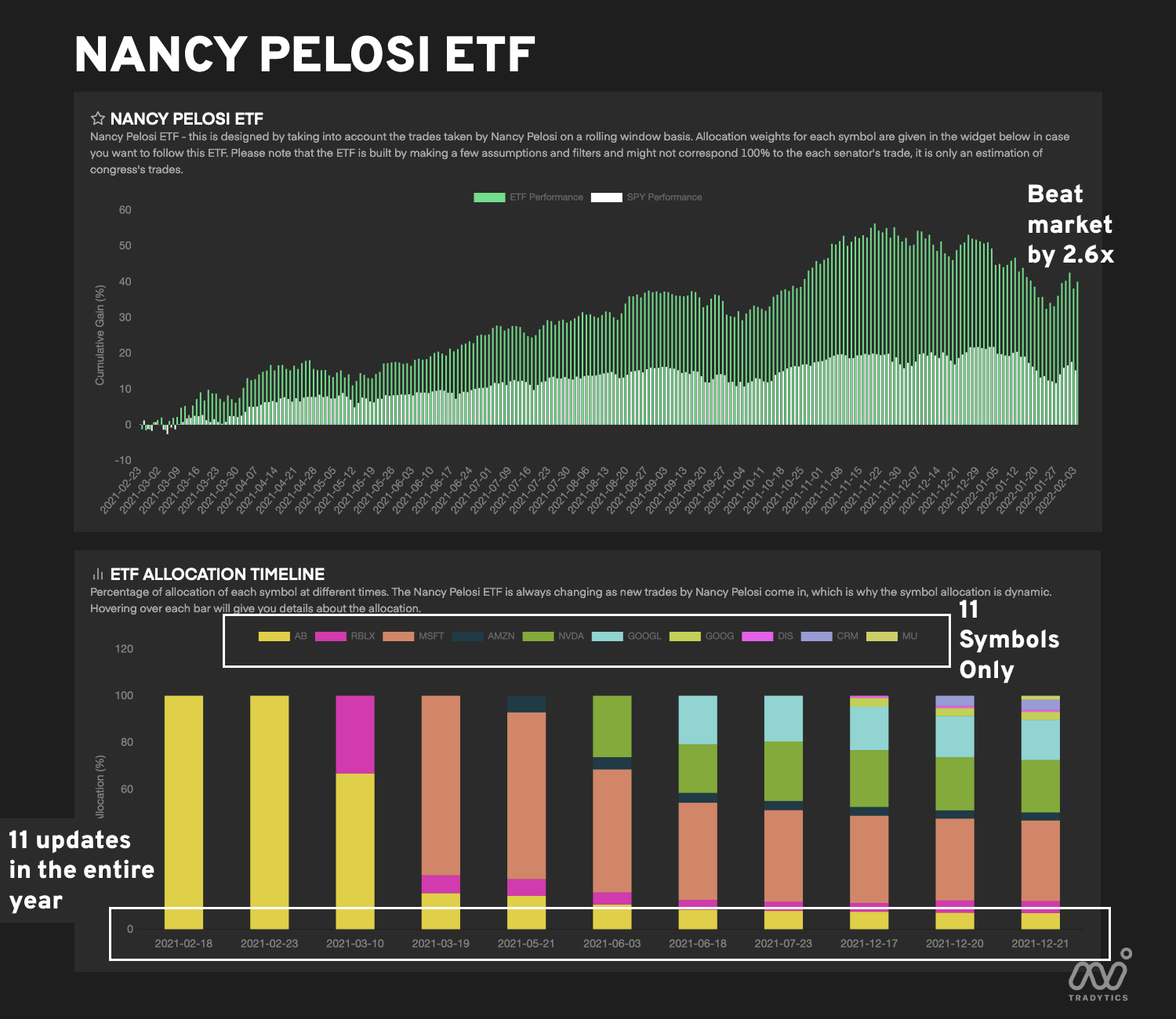 Looking at the screenshot above, the first thing to note is that although the congress ETF beat SPY by about 2x, the Nancy ETF actually beat it by 2.6x which shows how good she has been trading lately. The more important graph is the lower one that shows the allocation of each symbol in her portfolio at every day the readjustments were made. In contrast to the congress ETF, there are only about 10-11 symbols in her portfolio and she only made new trades about a dozen times in the last year, which is very manageable for retail traders as well. It is easy for us to keep an eye on her positions in the dashboard and follow them whenever they are reported.

Most people believe that the 45 day delay in reporting causes some limitations in trying to follow congress trades. As discussed earlier, that is obviously true to some extent but retail traders can still follow positions even after that delay, and still be able to earn similar profits as the members of congress. If you go ahead and take a look at the trades tables in the dashboards, you will actually see that many of the positions had not moved much before they were reported to the public. That is also a criteria that you can use to follow trades - only go into the ones that haven't moved much at the time of reporting. Despite some of the limitations, we believe Congress trading is a good source of generating alpha in the markets and can help retail traders find an edge. As always, please always do your due diligence before going into a trade, stay safe, and manage risk. Thank you for reading.