Most people use live options flow to gauge market sentiment and see what smart money and institutions i.e whales are doing. However, looking at individual flow can sometimes be misleading. If you see a call bought for an out of money strike for a few million dollars, you might assume the stock price will go up. That could be a fair assumption, but what if that large order was part of a quick 30 minute scalp and the same person exited after the stock price made a quick move up. As a retail trader following options flow, you might not see the exit position and stay in the contract for longer than required thus not making as much as the person you followed made, or even losing money as we will later see. Moreover, that single large order could easily be a hedge and there is no way to separate it out from other directional plays. We are here to solve this problem by following whale activity. 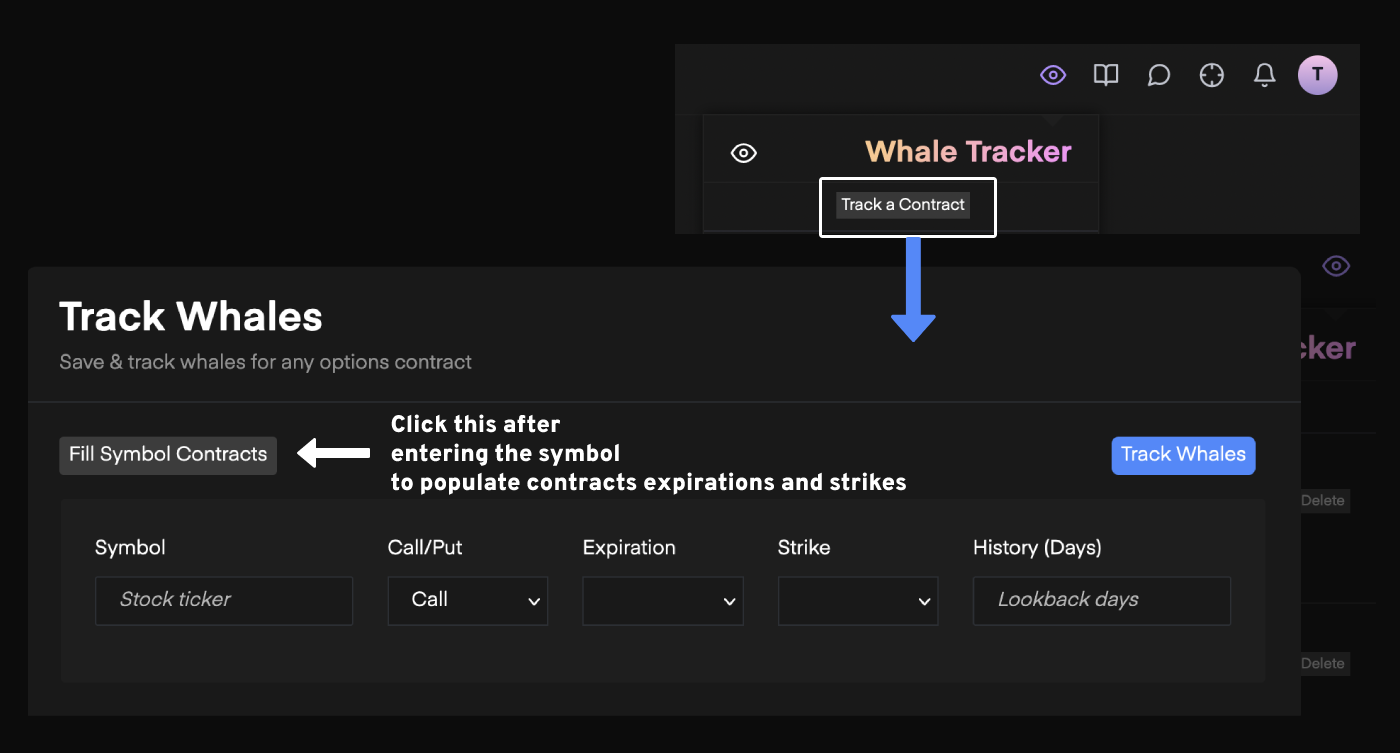 Tradytics has a whale tracker tool (eye icon on the top right of every page) that helps with tracking whales and following their entries and exits in options contracts. Users can input options contracts along with how much data they want to see on whale positions to get a tracking chart. The tool calculates the total amount spent on buying and selling the contract and plots a cumulative chart of the difference between bought and sold positions. This chart represents the whale activity in a cumulative way i.e whether they have been staying in, accumulating, or exiting a position. A side note - whale tracking charts are also present on Trady Flow & Bullseye signal dashboards in a more simpler form. 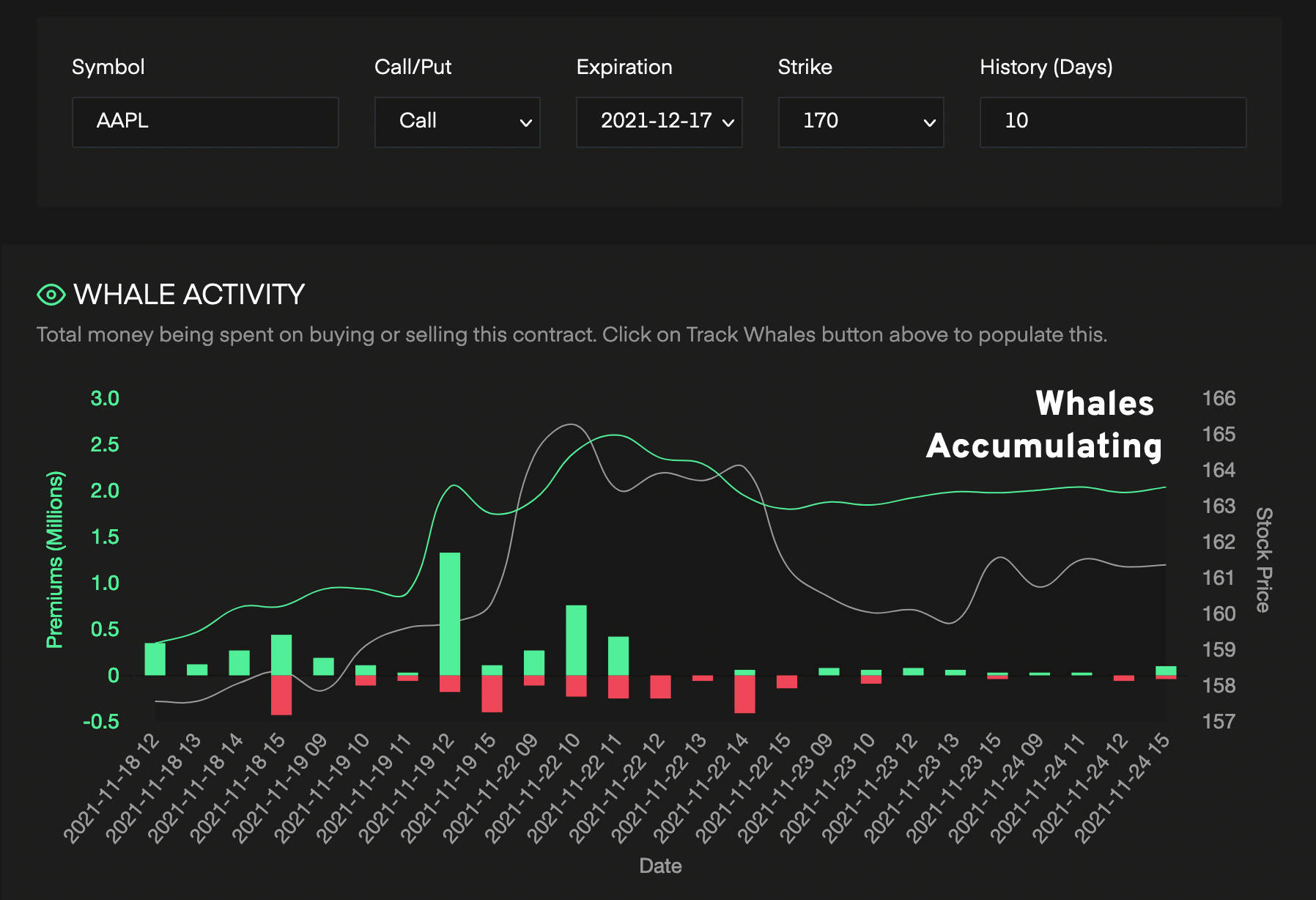 The chart above demonstrates how whales build positions for moves they expect. Each green bar is the premiums on bought positions, red is premiums on sold positions, and the green line is a cumulative value of net difference between bought and sold positions. The cumulative net premiums line (green/red/white), if above zero, signifies a bullish sentiment or an accumulation of a position while if the line goes down and is below 0, that signifies dumping of a position or a bearish sentiment. The gray line is the stock price. In our Trady Flow & Bullseye dashboards, we have a simpler version of this chart with the cumulative line being white. One important limitation of the tool is we base buy vs sell based on whether a contract was filled at ask or bid respectively. This works for most contracts but sometimes is not true.

We can see Apple (AAPL) current stock price is about 160. In the last 10 days prior to the analysis, the whales had been expecting an increase in the price by mid December, and have been buying large amounts of calls whereas the sold positions are not that big. The net premiums here are 2 million dollars which is a large number. Therefore, there are about 2 million dollars in net premiums that are expecting a move towards 170 while the stock is at 160. Even if we don't end up reaching 170, the whales are still expecting an increase in the price which will increase the value of their contracts.

Now that we have a basic understanding of how to read the whale tracking chart, we can go ahead and talk about real world options plays that users at Tradytics made.

On November 17th, 2021, there was significant activity towards 3600 Calls for AMZN expiring on November 19th while the stock price was at 3550. We caught this activity using our Trady Flow tool as soon as whales started putting in money. Price immediately started to go up and in a very little time, the contract was up a 100% from the time of the alert. Users at Tradytics wondered if it was a good idea to get out with their profits or stayed in. In order to answer that question, we looked at the whales and what they were doing. Below is the chart from that day. 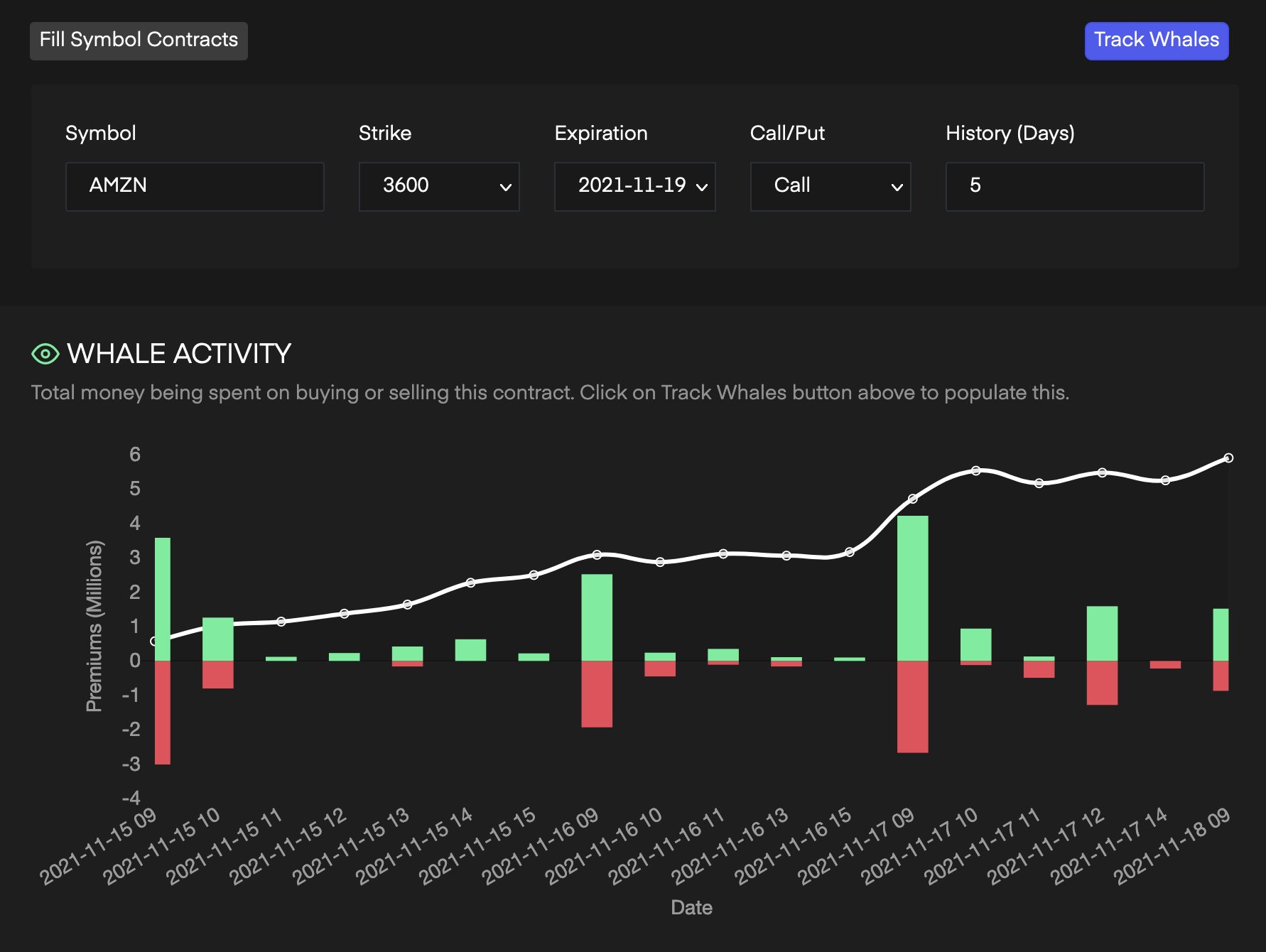 You can see that the whales kept building their position and did not sell much of it, which is why the net premiums kept growing and cumulative line (white) kept going up. Because of that, most of Tradytics users stayed in the 3600 calls. By end next day, price went as high as 3700 which made the contracts go from 100% to further 500% more giving us a total of 600% gains. There was some selling afterwards which made us sell our contracts as well

Because they whales stayed in their positions, users at Tradytics did as well. As a result, by end next day, price went as high as 3700 which made the contracts go from 100% to further 500% more giving us a total of 600% gains. Without whale tracking, users would have exited way before.

The example above illustrates how following whale activity can provide us insights into our plays and give us conviction in holding them. In contrast, if the whales dumped all their positions i.e the net premiums either became negative or zero, we would immediately sell our contracts as well.

Continuing the topic of how to follow whales to know when they enter and exit, let us discuss an extreme example that we recently traded. Microsoft (MSFT) had a Trady Flow signal come up on November 23rd, 2021 in early morning. There was some repeat buying for 350 strike calls for Jan 22. Based on the whale tracker, you can see the green bar was bigger than the red at market open. You can see the repeat buying activity on the actual flow as well. Based on that, users at Tradytics went into the signal. However, just after 20 minutes, you can see an influx of sell flow which signified that whales had exited their positions. MSFT moved quickly and their contracts went up 25% in 20 minutes - they started buying when price was at 6 and sold at an average of 7.2. That was their intention and that's what they got.

After the whales exited, the price of the contract kept going down all day. That shows the power of following smart money instead of simply generating a signal based on flow and going into it blindly. The smart money spent about 500K in net premiums only hoping to do a scalp. If anyone assumed that those were swing trades since the expiration was 2 months away, they would be wrong here.

Until now, we have only talked about how to stay in a position by following whales and getting out with profits. However, as with anything in trading, nothing guarantees 100% success. Large options flow often comes from individuals and institutions, but they are not bound to be always correct. A great example of this is discussed next for the ticker AFRM 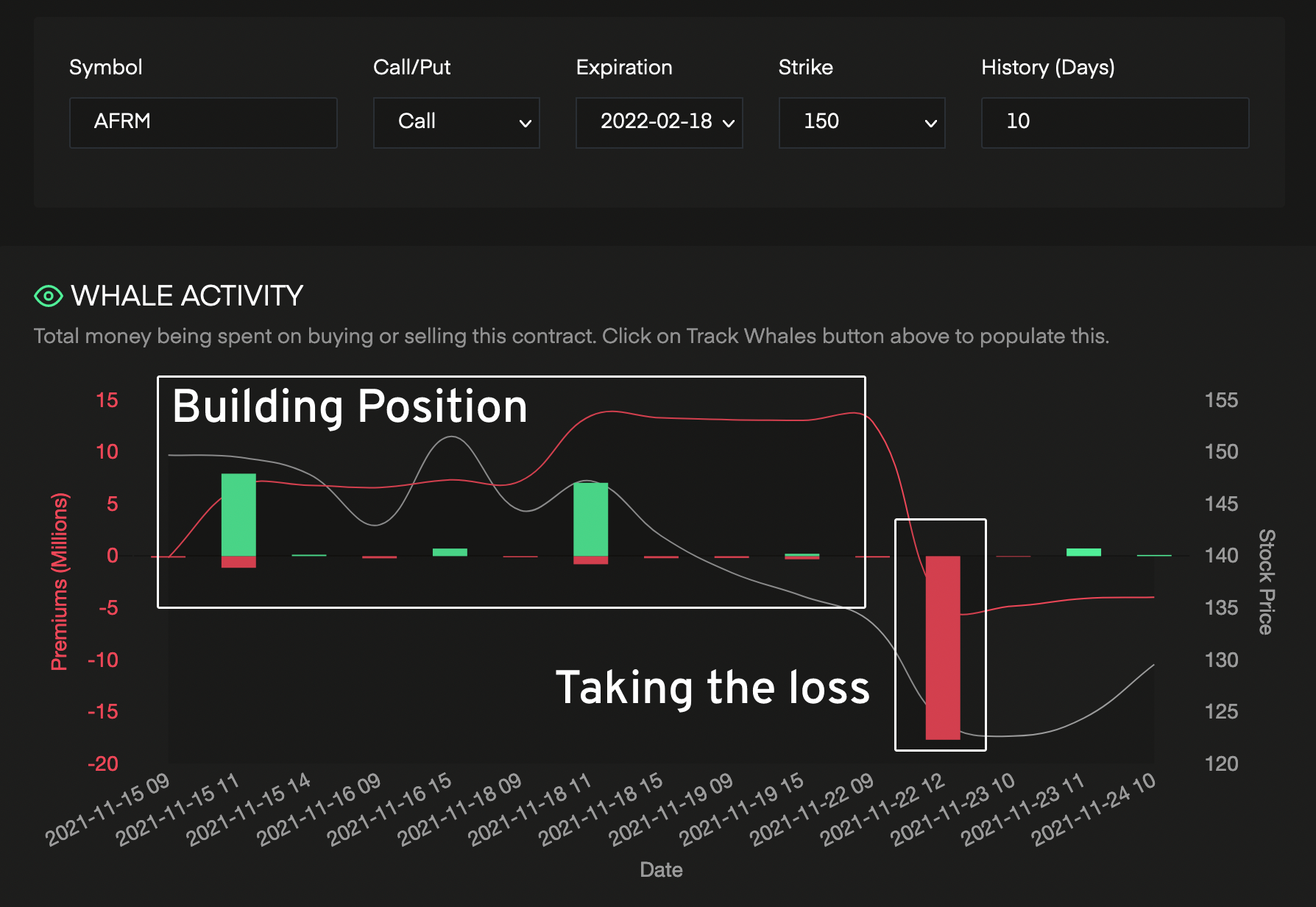 During the week of November 15th, 2021, Trady Flow gave a very high quality signal for AFRM that indicated that whales were building a large position in 150 strike call for Feb 2022. They spent about 10-15 million in net premiums and it seemed like they were heavily bullish. However, AFRM had an offering later on and stock price went down. Looking at the updated whales tracking chart, it looked like the whales still had faith in the move as they continued holding while the price went down. However, finally after some days, there was a huge red bar which indicated that the whales probably sold their entire position and gave up on their bullish thesis. Tradytics users were also in this play, and we all exited with the whales thus taking some loss.

This example had to be discussed here to show users the limitations of options flow. Not every flow works out in the end and users should always be aware of that. Therefore, it is always a good idea to couple your flow analysis with some additional due diligence to improve the probability of your plays.

Simply looking at whales to stay in and out of positions is not the only way to follow them. Another great way is to explore what positions smart money is building by looking at the whale tracker. In summary, we try to look for contracts with large volume, and see where whales are building their position. For instance, if we see large amounts of money being spent on an out of the money call on consistent basis while the stock price is not yet there, we can assume that whales are building a position in anticipation of a price increase. 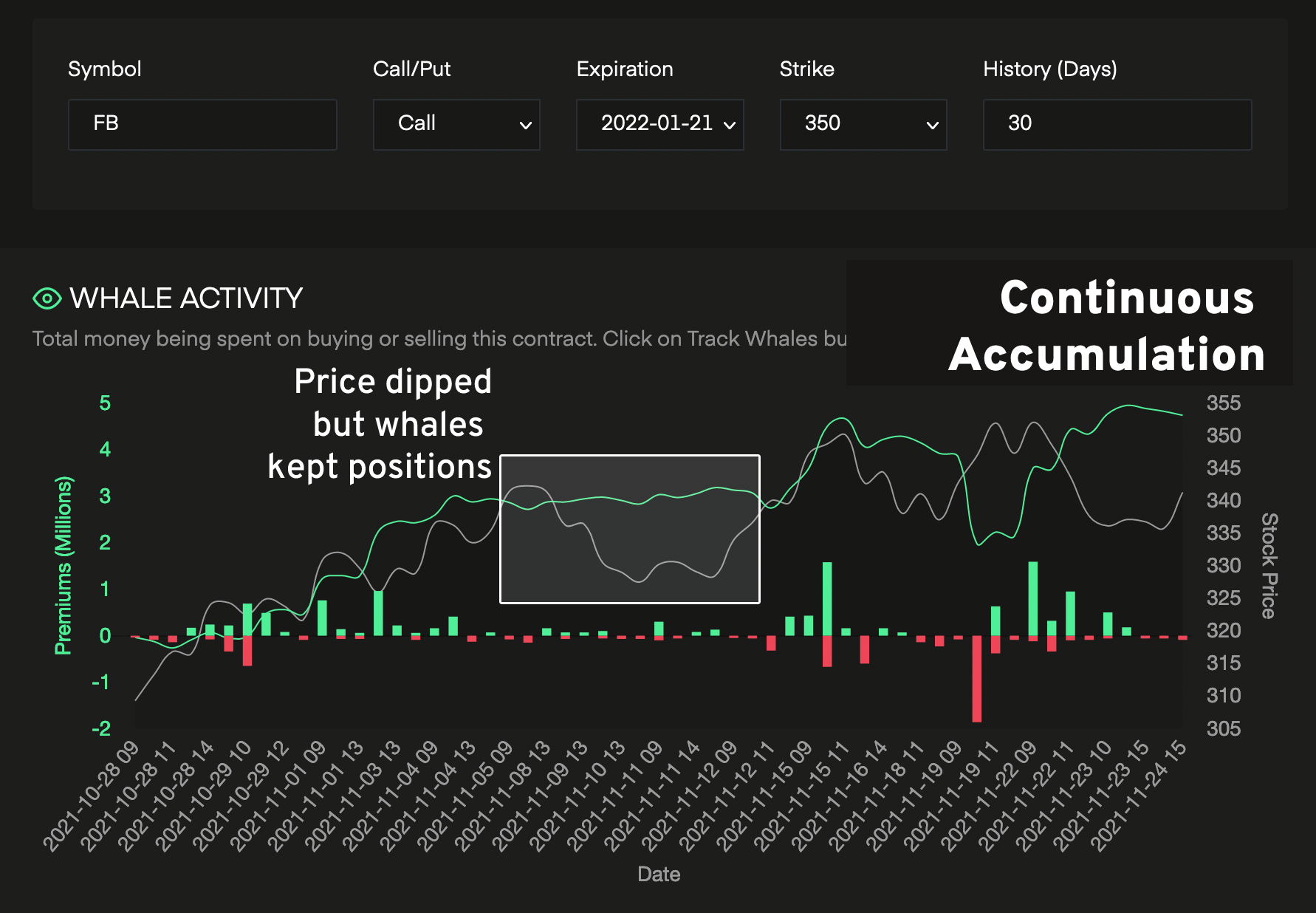 The image above demonstrates an example of how positions are built. We take a look at last 30 day's of data for a 350 strike call expiring on Jan 2022. Looking at the graph, it is easy to see a continuous accumulation of bought calls over the last month. Although the price dipped a few times, the whale positioning kept going up which shows that the whales are confident in a continuation of a move up. Towards the right side of the chart, the whales did take some profits but overall, they are still accumulating.

In this article, we discussed how smart money i.e whales build positions, enter, and exit them, and how we can follow them to improve our trading and gain an edge in the market. Options flow is great because retail users are simply trying to copy institutions and smart money to make profits. However, there are quite a few limitations on solely looking at individual flow and going into plays without keeping track of how positions are bought and sold. Tradytics whale tracker solves that problem in an efficient way and helps users find an edge in the market.

Finally, please always know that options flow has its own limitations and it will not always pan out as we saw with Affirm's example above. Therefore, it is always a good idea to find more confluence factors when going into a position to improve the probabilities of your plays.