Anchored VWAP (AVWAP) & How to Use It

Technical analysis is widely used in the trading community to make price action analysis easier. Some people believe it is the holy grail of trading while some believe it is just a myth. We will not talk about whether that is true. Rather, we will talk about a technical indicator that is deeply rooted in how price action is formed and how institutions, smart money, algorithms, and retail traders combined can give us a hint of how price might react in certain situations. We will achieve this by using what's called Anchored Volume Weighted Average Price (AVWAP). Most people are already familiar with VWAP and use it on daily basis. But very few people are aware of AVWAP and how useful it can be for a trader.

VWAP means the volume weighted average price. In simplest terms, it is the average price that traders pay for a stock in any time frame, session, or interval.

On a price chart, VWAP is simply a line that starts new at the start of every day's market. Traders often use VWAP in various ways - as support and resistance levels on the intraday chart, to gauge trend (VWAP moving up signifies an uptrend and it moving down shows a downtrend), to anticipate reversals if price goes far away from the VWAP, etc. VWAP works well for all the aforementioned tasks. However, the main limitation of VWAP is that it resets at the start of every day. Therefore, it is not possible for swing traders to use it since it is calculated based on a single day's data only.

To address this, anchored VWAP was introduced, which anchored the VWAP from a certain point. The only difference here is that instead of starting VWAP from the start of the day, we are allowed to start it from anywhere. Let us understand why AVWAP is significantly more powerful compared to simple VWAP. 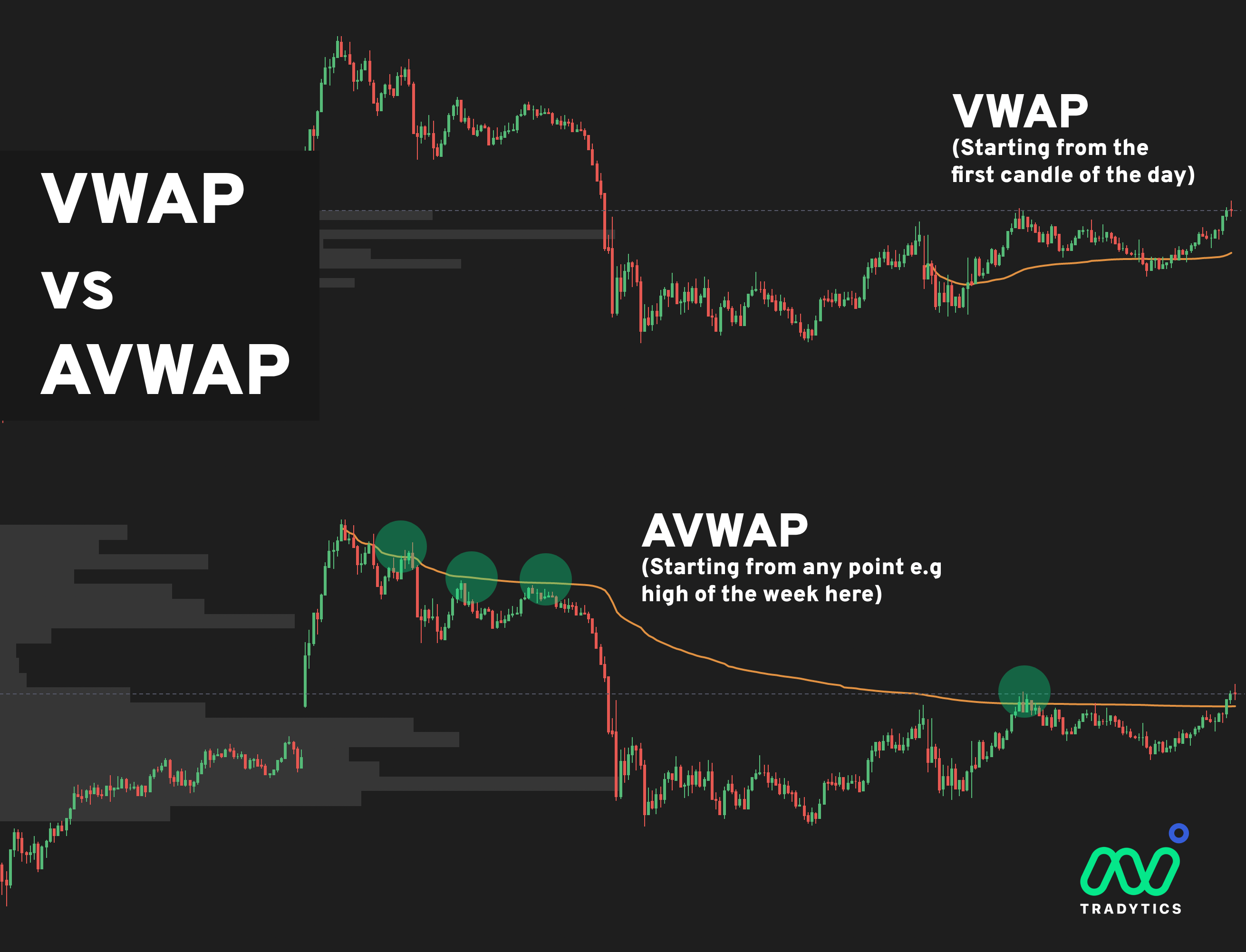 The image above demonstrates the difference between the two. As discussed before, VWAP always start from the first candle of the day while AVWAP can have any starting point. In this case, we started the AVWAP from the high of the week. Intuitively, the AVWAP here is the average price traders paid while the price started to go down from the top.

Why is AVWAP so Powerful?

Let us take the chart above and discuss why the AVWAP is so powerful. Right from the top of the week, the bears became very active thus sending the price downwards, and the AVWAP tracked the average price they potentially used for shorting purposes. Now if the price goes above their average price paid to short, they will either be in loss, or will have to cover, and they hate that. Therefore, whenever price touches the AVWAP, bears try to take control and start shorting again, thus sending the price down again. Because of this, you can see that the AVWAP acted as a strong resistance level atleast 3-4 times within a week. That's why it's the most powerful indicator out there. There is a logic behind how and why it works.

Where to Anchor VWAP from?

The first question most of you should ask here is Where do we anchor the VWAP from? That's an excellent question and we will discuss some important anchors with examples ahead.

The first anchor that most people should use is the previous highs and lows in whatever timeframe they are looking at. For instance, in the example above, we looked at the high of the week. Traders can use the previous swing high or low and anchor from there. An anchor from the previous low would give us the average price that traders paid on the run up. Anytime price tries to go below it, it should act as a support since every who bought during the rally does not want to lose money, and will step in to defend their position. We have already seen the example above for AVWAP from highs. Let us take a look at an example with AVWAP from lows.

The chart above is the hourly chart for Lucid Motors (LCID) from November 2nd, 2021 onwards. We had a low on that day and price started to move upwards after that. Anchoring the VWAP from that low gave us three support points that price could not break. At every break, buyers stepped in and defended the AVWAP as a support. These buyers could either be retail traders, large institutions, computer algorithms, or what not. The only thing we know is that these levels are often defended quite well and can act as great support and resistance levels.

Another great anchor is gap ups and downs. Whenever a gap occurs in the price, if plenty of buyers or sellers step in aggressively and the price continues to trend in the gapped direction, the anchored VWAP from the gap point can be a great levels for traders to watch.

The chart above demonstrates an AVWAP from a gap up in Microsoft (MSFT) on the daily chart. Once we gapped up, given how strong the trend in MSFT was, many buyers would have added to or started bullish positions. Starting the VWAP from the gap gives us the average price they paid for their positions. Anytime price starts to move below the gap up AVWAP, we can see a clear support level. These charts are not cherry picked - AVWAP is one of the best technical indicators out there and once you learn about it, you will find these support and resistance levels everywhere.

The example above illustrates an AVWAP from after earnings of Amazon (AMZN). Right after earnings with a small gap down, the market couldn't decide whether the stock should go higher or lower. However, after some initial price action, price started to rally and AVWAP started to face upwards as well. The price action afterwards respected the AVWAP as a support.

Year to date, month to date, and week to date are some of the most important AVWAPs you will use in your trading. These act as strong support and resistance levels. When a new year, month, or week starts, many people start new positions on both long and short side. The YTD, MTD, and WTD AVWAPs show the average price they paid for their positions, and they defend these AVWAPs when price tries to cross them.

Above is a great example of S&P 500 (SPY) anchored VWAP from the start of the month. It acted as a support initially but then broke it for a day. However, buyers stepped in right away and brought it back above the AVWAP level. Afterwards, it contiues to act as a strong support.

As discussed above, AVWAPs should be anchored from important events. Although we have discussed the most important events we have empirically observed for AVWAP anchors, the list is not exhaustive. Other events can be major news, mergers, share offerings, etc.

Stocks is not the only security where AVWAP works well. The beautiful thing about it is that it works across all securities equally well. With crypto booming in the last few years, AVWAP has proven to be one of the strongest indicators of support and resistance levels for every coin. The example above is from Ethereum (ETH) and it is clear that the price found support on the AVWAP from the lows. YTD, MTD, and WTD anchored VWAPS work particularly well for crypto because it is a booming market and many institutions and participants are still joining in.

When do AVWAPs mostly Break?

We have talked about different anchors in depth and seen how well the price respects them as support and resistance levels. However, these levels do not always hold and that is an important thing to remember. A great rule of thumb to remember is that the levels tend to break when AVWAP starts to flatten out.

A great rule of thumb to remember is that the levels tend to break when AVWAP starts to flatten out.

The example above for Tesla (TSLA) demonstrates this on the 15 minute chart with AVWAP from the low. Initially, when AVWAP had a high upward trajectory, it acted as support. Once it started to flatten out, the price broke it quite easily.

At Tradytics Stocks Dashboard, anchoring VWAPs from certain points can be done by simply clicking on any candle you want to anchor from. This makes it quite easy to anchor from different starting points. However, sometimes, we want to see all the important anchored VWAPs together on the chart. Instead of having to do multiple clicks and finding lows, highs, gaps, etc, Tradytics makes it easy for you to draw all event driven AVWAPs with the click of a button.

The image above shows the Even Driven AVWAP button that you can click to draw a wide range of important AVWAPS on your chart. This is incredibly useful as it gives you insights into the most important levels that price tends to respect. It also provides you confluence i.e if the price is touching multiple AVWAPs, the probability that there is a strong support or resistance level there gets much higher.

In this article, we discussed what anchored VWAP is, what are the differences between VWAP & AVWAP, how to best anchor it, and how it acts as strong support and resistance levels that traders can use to trade. In my experience, AVWAP is one of the strongest indicators because of the psychology behind it and how participants tend to defend their average price paid for the stock. Many technical indicators are simply mathematical formulas - AVWAP on the other hand has a logic behind why it works. That makes it very powerful in our opinion.